Hughes Network Systems, LLC (HUGHES), an innovator in satellite and multi-transport technologies and networks for 50 years, and OneWeb, the Low Earth Orbit (LEO) satellite communications company, today announced their selection by the U.S. Air Force Research Lab (AFRL) to demonstrate managed LEO satellite communications (SATCOM) services to connect the Arctic region to sites around the globe. Under the agreement, Hughes will test and implement these end-to-end services on the OneWeb system between selected U.S. Northern Command (NORTHCOM) locations, a first step in harnessing the power of LEO satellites for high-speed, low-latency broadband access in the Arctic. 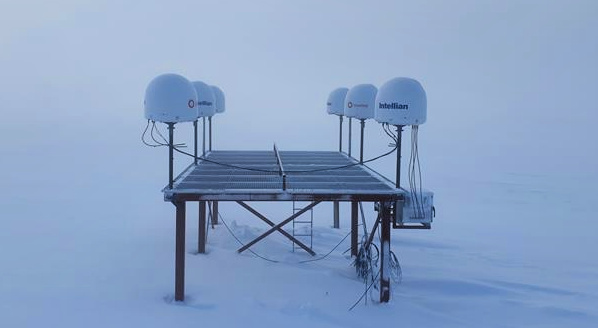 “This opportunity reinforces the relationship between Hughes and the U.S. Air Force to ensure resilient, flexible SATCOM networks for tactical, multi-domain operations,” said Rick Lober, vice president and general manager of the Defense and Intelligence Systems Division at Hughes. “We look forward to partnering with OneWeb to bring LEO innovation into the military SATCOM enterprise, especially in the strategic Arctic region where connectivity has been limited—until now.”

“The OneWeb constellation has been designed to enable low-latency broadband access across the globe, allowing connectivity in previously unreached areas—a capability that is ideal for tactical, multi-domain operations in the Polar region and beyond,” said Dylan Browne, Head of Government Services with OneWeb. “Working together with Hughes, we will bridge the gap in connectivity for NORTHCOM with an interoperable and secure solution.”

As the prime contractor on the project, Hughes will lead adaptation, integration, testing and ongoing management of this service demonstration with OneWeb and Intellian, who are developing user terminals for use on the OneWeb network. Designed for ease of installation, the new Intellian terminals will utilize next-generation technology to provide a cost-effective system to access the low-latency, high bandwidth connectivity offered by OneWeb.

Under a separate agreement with OneWeb, Hughes is engineering and producing the gateway equipment and user terminal core module, making the company a logical choice for enabling high-speed, low-latency services above the 50th parallel North, an area that has been difficult to connect with other types of satellite services. The DoD contract is part of the U.S. Air Force’s Defense Experimentation Using the Commercial Space Internet (DEUCSI) program.

OneWeb’s network was designed for global coverage and is uniquely capable in its ability to deliver much-needed connectivity services to the Arctic. With 182 satellites launched to date and regular 2021 launches planned and on-track, OneWeb will be able to deliver coverage to the 50th parallel North and above by the end of 2021, bridging a long-standing connectivity gap and building secure communications capability in an underserved region.