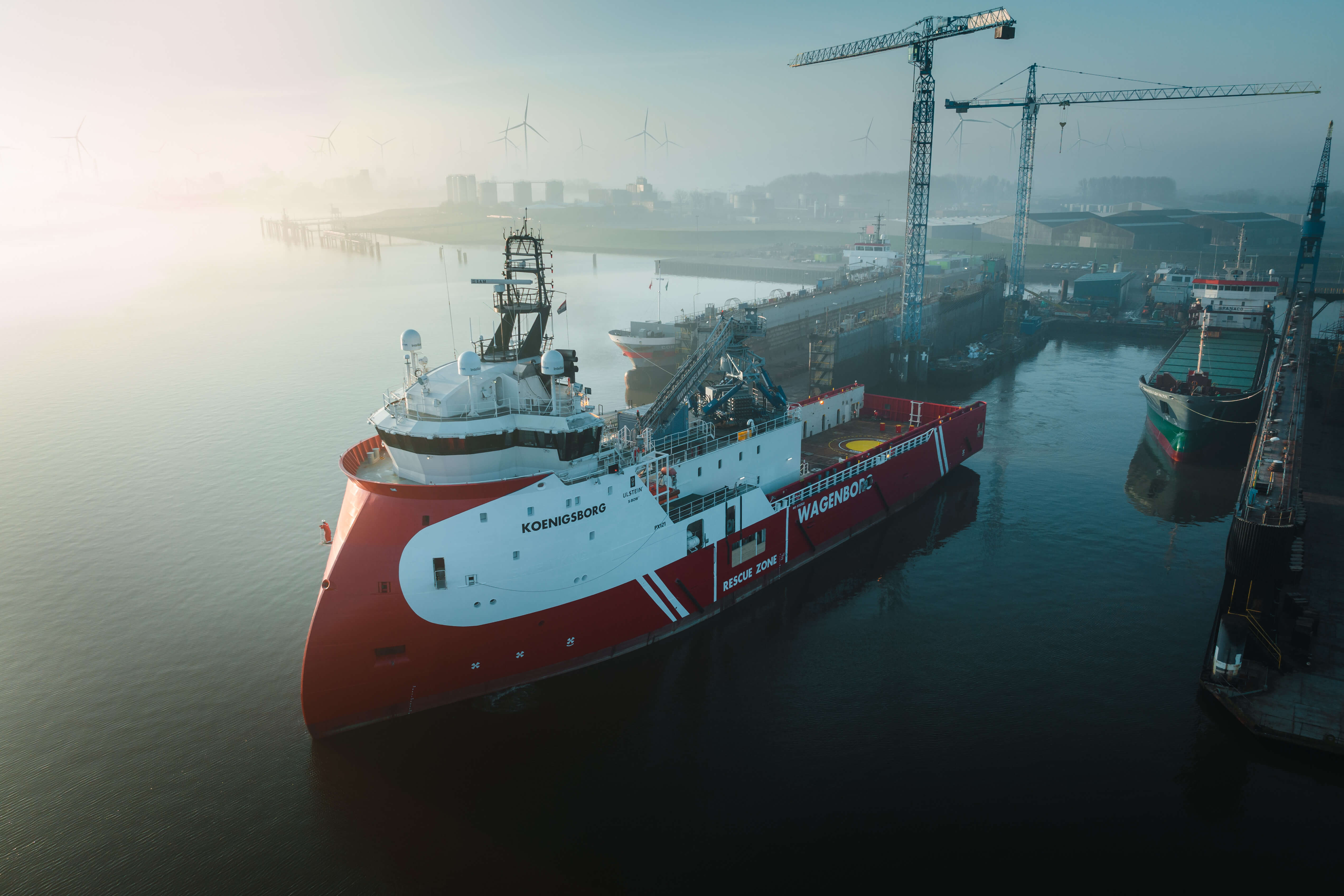 ‘Walk to work’ isn’t a concept most people would associate with a life at sea, but those in offshore industries are familiar with ‘walk to work’ (W2W) vessels. These ships have become an indispensable aid for transferring crews safely and economically to and from offshore platforms, even in the most adverse weather conditions. Wagenborg Offshore, a subsidiary of the Royal Wagenborg marine logistics conglomerate, operates a fleet of vessels including three walk to work ERRV (Emergency Response and Rescue) vessels and has just deployed a fourth – the first in the fleet with Intellian satellite communication hardware on board.

The latest of Wagenborg Offshore’s W2W ships, named Koenigsborg is operating as a standby and support vessel for the inspection and maintenance of unmanned platforms in the North Sea. The Royal Niestern Sander shipyard in Delfzijl in the Netherlands was tasked with the refit project, which included an accommodation module capable of housing 40 people. Enabling crews to sleep in such close proximity to unmanned offshore platforms significantly reduces the time, expense and environmental impact involved in conveying them repeatedly over longer distances.

Leading satellite service provider Castor Marine, meanwhile, was entrusted with updating the vessel’s communications system. Operating in remote locations, with shifting sea states and often extreme weather conditions which characterise deep-water offshore environments obviously pose a very specific set of challenges where connectivity is concerned. A dependable, high-quality, always-on communications link is essential for the personnel responsible for monitoring, repairing and replacing components on offshore assets, and reporting back to shore teams. Close contact with the management team on land is also a critical lifeline should an emergency occur; and crew members understandably need to easily contact family and friends as well as engage with media platforms in downtime when they’re so far from home.

The Intellian C700 is the ideal L-band companion to the NX Series of antennas. It utilizes 12-patch phased-array technology which makes it the best-performing Iridium Certus terminal on the market, providing exceptional pole-to-pole service even at low angles of elevation. The C700 is capable of bandwidth speeds of up to 704 Kbps and uplink data speeds of up to 352 Kbps as standard, making it an ideal back-up solution, able to maintain operations or perform remote diagnostics when VSAT is unavailable.

Castor Marine are global industry experts, delivering bespoke satcom solutions to their energy customers. The Intellian solution selected by them for Wagenborg Offshore is already substantially reducing logistical and operational costs as well as significantly reinforcing crew morale. The dual v100NX antennas with 25W Ku-band BUC ensure that the crew have the necessary bandwidth for all requirements. A key aspect of this solution is that it’s future-proof: NX Series antennas support GEO, MEO and LEO satellite constellations, making them a sound long-term investment. The fact that they are network-agnostic gives customers the flexibility to change as their business needs evolve.

“The combination of a dual-antenna VSAT solution with an L-band Iridium Certus terminal struck us as the most practical and versatile choice for the crew on a standby and support vessel spending long stretches of time offshore,” says Mark Olthuis, Director Maritime Offshore & Energy, Castor Marine. “We knew that Intellian hardware would be more than up to the task: the superior build quality goes hand-in-hand with exceptional reliability and flexibility. Moreover, the Intellian personnel are a pleasure to work with; always on hand to answer any queries and lend after-sales support as and when required.”